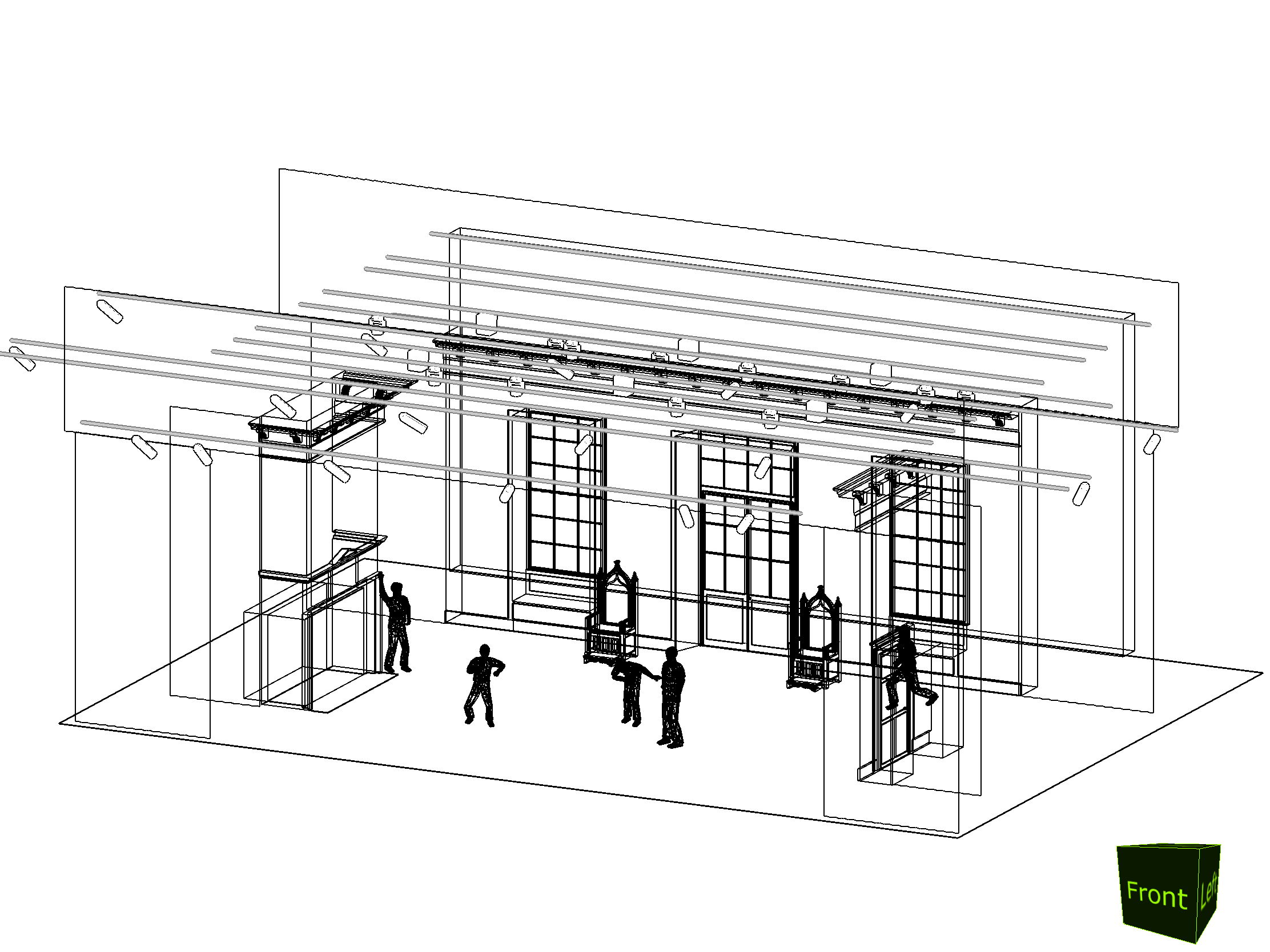 The following three tutorials deal with the topic of theater lighting. I will go into concepts and explain the realization with StageLight.

The optimal illumination of the actors, in which the face looks most natural, is achieved with 2 spotlights. Ideally, this should be positioned 45° from the top and 45° from both sides.

On theater stages, however, this is not done for all actors, but instead, the stages are divided into so-called light zones. Also, 45° cannot always be achieved structurally for all areas. In the example project used, the stage is divided into 3×3 zones (A1-C3). 2 spotlights are positioned for each zone, as shown here in the example of A1.

I create a group in StageLight for each of these 2 zone spotlights. For A1, that’s the ETC Source Four with DMX addresses 2 and 4. Since the ‚Source Four‘ isn’t in the fixture library, I’ll use a generic fixture („Desk Channel“) with an intensity channel.

In addition to the 9 zone groups, I create a group for all zones together.

I put these groups on the last bank of 10 pages in the mixer. With this, I reserve the first banks for the cues of a scene but more on that in the next tutorial.

In addition to the 18x ETC Source Four, there are 6 other Fresnel spotlights that illuminate the stage from above and 12 Martin Mac Aura Wash for the colorful atmosphere.

In the current example, zone B2 is active. The auras in the room glow blue and those for the windows are turquoise. The front 3 Fresnel lights are minimal to give the room more contour.

We use cookies on our website to give you the most relevant experience by remembering your preferences and repeat visits. By clicking “Accept All”, you consent to the use of ALL the cookies. However, you may visit "Cookie Settings" to provide a controlled consent.
Cookie SettingsAccept All
Manage consent

This website uses cookies to improve your experience while you navigate through the website. Out of these, the cookies that are categorized as necessary are stored on your browser as they are essential for the working of basic functionalities of the website. We also use third-party cookies that help us analyze and understand how you use this website. These cookies will be stored in your browser only with your consent. You also have the option to opt-out of these cookies. But opting out of some of these cookies may affect your browsing experience.
Necessary immer aktiv
Necessary cookies are absolutely essential for the website to function properly. These cookies ensure basic functionalities and security features of the website, anonymously.
Functional
Functional cookies help to perform certain functionalities like sharing the content of the website on social media platforms, collect feedbacks, and other third-party features.
Performance
Performance cookies are used to understand and analyze the key performance indexes of the website which helps in delivering a better user experience for the visitors.
Analytics
Analytical cookies are used to understand how visitors interact with the website. These cookies help provide information on metrics the number of visitors, bounce rate, traffic source, etc.
Advertisement
Advertisement cookies are used to provide visitors with relevant ads and marketing campaigns. These cookies track visitors across websites and collect information to provide customized ads.
Others
Other uncategorized cookies are those that are being analyzed and have not been classified into a category as yet.
SPEICHERN & AKZEPTIEREN